If you haven’t yet heard of the Portuguese Riviera it’s time to discover. This incredible coastline stretches out to the west of Lisbon, and its upmarket seafront neighborhoods make it popular with both expats and investors.

Are you considering it, but aren’t sure where to buy property in Cascais? Take a look through this article to find out more about the different areas and where is the best place to invest.

The history of the Portuguese Riviera

The Cascais municipality is one of the wealthiest areas, not just in Portugal but also throughout the entirety of the Iberian Peninsula.

The region was first established as a luxury resort for Lisbon’s wealthiest residents in the 1800s when the King of Portugal, Luis I, established a summer residence in the town.

The area’s upmarket reputation was later solidified with the Casino Estoril. Construction began in 1916. Today the casino is one of the biggest in Europe and served as inspiration to James Bond writer Ian Fleming, who visited the area as an intelligence agent for the British government in 1941.

Due to the country’s neutrality during WWII the Portuguese Riviera became a hotspot for dispossessed royals and spies, and even today the beauty and luxury will remind visitors of the set of a James Bond film. 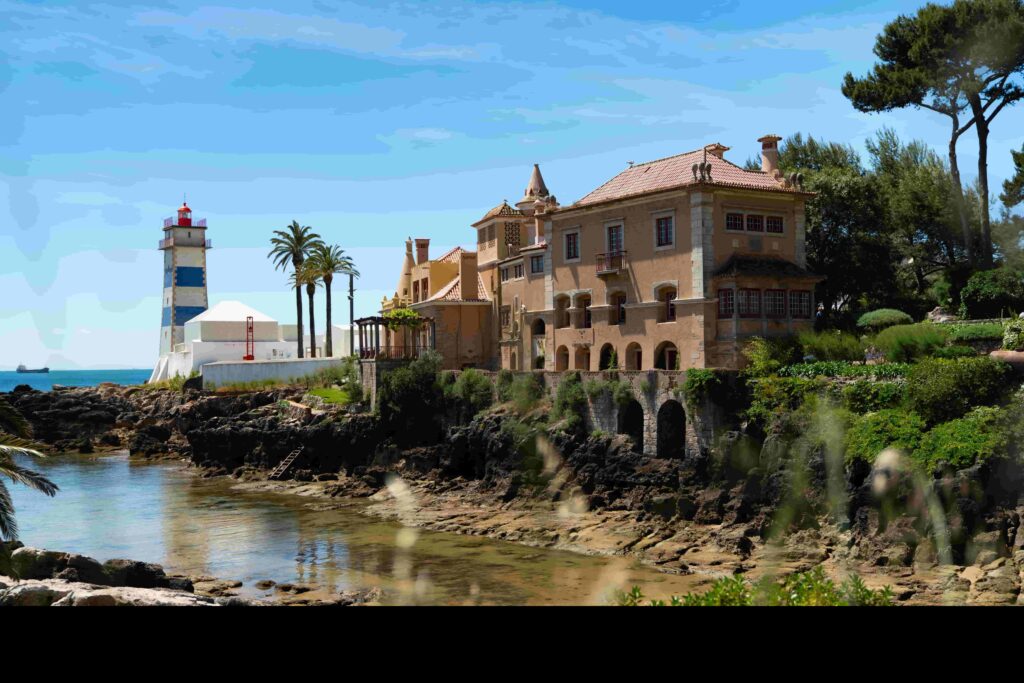 Why buy property in Cascais?

The Cascais municipality isn’t just beautiful—it is also a fantastic location to invest in property. It’s not difficult to understand what makes the area one of the most highly valued in Portugal, it is placed on a picturesque stretch of coastline, but is also close to the capital city. A train line links the neighborhoods along the beach with the center of the city, and Lisbon is less than 45 minutes away by car, making it an excellent idea to buy property in Cascais.

Cascais benefits from a moderate climate, with hot weather in the summer and mild winters. In the summer there are average highs of 26°C, though daytime temperatures frequently surpass 30°C. It also has the benefit of being by the Atlantic coast, which means even on the hottest days there is usually a sea breeze to provide some relief from the heat. In January, the coldest month, average lows are around 11°C.

Anyone looking to buy property in Cascais will probably already know that the area is famous for its beaches, with some of the most popular being Carcavelos, the Praia da Rainha in the town of Cascais, and Guincho on the coast to the north. The beaches are not only beautiful but also varied, Carcavelos is popular with surfers, whereas the calm waters of São Pedro are more popular with beachgoers who are looking to work on their tan. The rugged coastline of Sintra offers something entirely different, and although it can be windier than Cascais, it is better for those who prefer wilder, less developed coastlines. 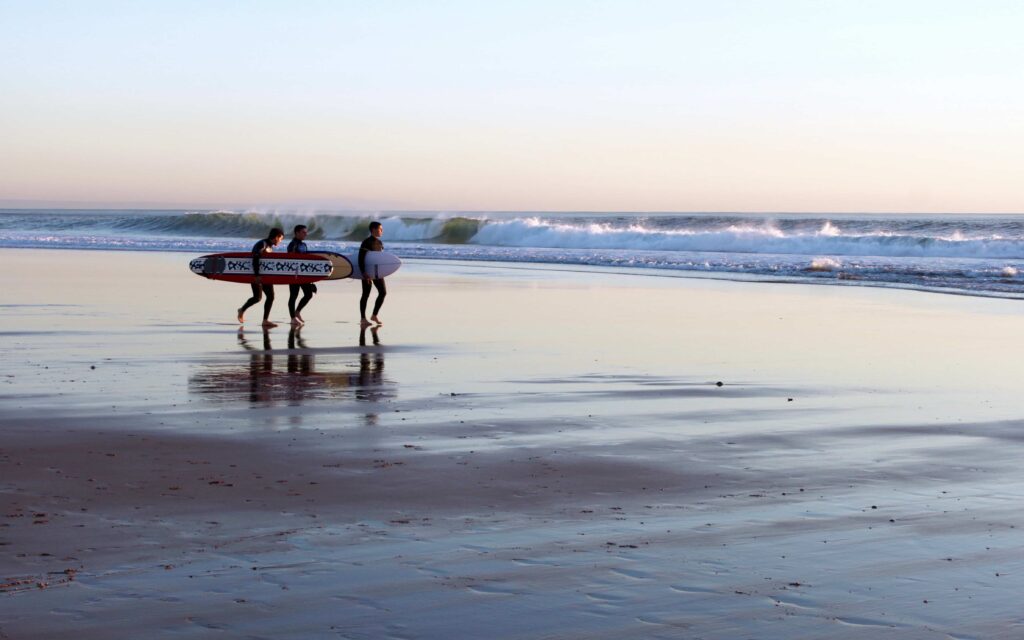 One of the highlights of living in Cascais is the diverse cultural activities it has to offer. There are a number of art galleries in the town of Cascais, including the Casa das Histórias Paula Rego and the Museu Condes de Castro Guimarães.

The Cascais greater area is known for its luxury, from the casinos to the golf courses and Michelin-star restaurants. There are a number of high-end restaurants to choose from, including two Michelin-starred restaurants overlooking the Penha Longa golf course: LAB and Restaurante Arola. Alongside the fine dining, there are many opportunities to drink cocktails and good wine at many places along the Cascais coastline. One of the highlights in the Palacio Hotel in Estoril, where you can drink a martini in one of the places that inspired James Bond.

The high quality of living in Cascais attracts many expat communities to the area, as well as the excellent local schools and the proximity to Lisbon city center.

Property map of where to buy property in Cascais 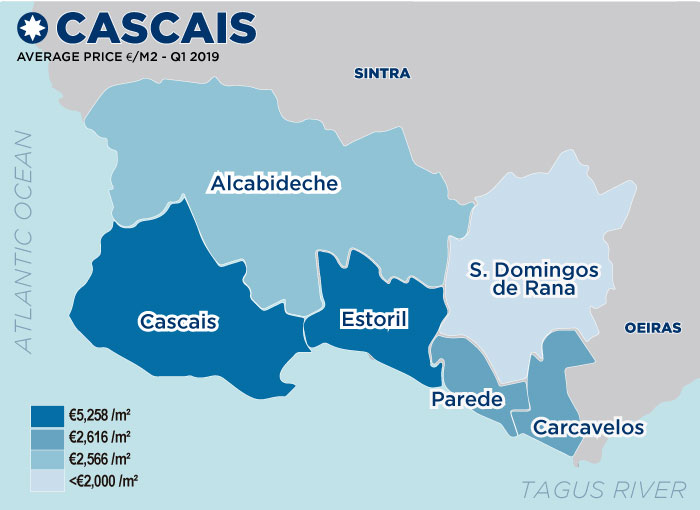 Visitors to the town of Cascais will find themselves among the palaces and turreted mansions that bring to mind its regal past. Homes in Cascais and Estoril are among some of the most expensive in the entire municipality.

Estoril is the location of the famous Casino Estoril, which the oldest in Portugal and the largest in Europe. The leafy suburbs in the surrounding area have large, spacious houses, many with swimming pools and just a short distance from the beach.

Property prices in Cascais and Estoril

Advantages of property in Cascais and Estoril

Life in the Cascais region is incredibly family-friendly, with a number of good international schools to choose from, such as Park International School, St John’s School and St Antonio International School. There is also a wide variety of excellent housing on offer, with spacious, detached homes, close to all the necessary amenities, like supermarkets, gyms and yoga studios. The area has excellent transport links—residents can be in Lisbon’s business district in 30 minutes.

The Cascais housing market is also very highly valued, as well as stable, and has seen a 37% increase in prices over recent years.

Halfway between Lisbon and Cascais, the neighboring suburbs of Carcavelos and Parede have a laid-back and tranquil quality of their own. With large, detached houses leading down to the beach, these areas are a favorite spot for surfers, owing to the quality of the waves on Carcavelos beach.

The beachfront is transformed during the summer, as it is one of the preferred weekend getaways for Lisbon residents looking to escape the heat.

Property prices in Carcavelos and Parede

Advantages of property in Carcavelos and Parede

Like Cascais and Estoril, Carcavelos and Parede also have a number of excellent international schools, such as St Julian’s School and St Dominic’s International School. It is also a hotspot for outdoor sports, in the winter months it gets some of the best waves in Portugal, and it is also a good spot for bodyboarding, paddleboarding in the summer, as well as kitesurfing and kiteboarding.

One of the more reasonably priced areas of the Cascais district, Alcabideche is situated along the coast to the north of the town of Cascais. It offers the opportunity for investment at a lower cost, while still having all the advantages which the Cascais area has to offer, such as beautiful coastlines and a convenient location. In terms of schools, there is the IPS-International Preparatory School and St James’s Primary School.

One of the advantages of Alcabideche is its proximity to Sintra national park, convenient for anyone interested in hiking and cycling. It is also close to the Penha Longa and Oitavos Dunes golf courses.

Is it better to rent or buy property in Cascais?

If you would like to talk to a property specialist about what investment opportunities could be available to you, schedule a free 15-minute consultation with one of our team today.

Is it better to buy property in Cascais or Lisbon?

There are a number of benefits to buying property in both Cascais and Lisbon. Both present as stable investment opportunities, with the price of property has risen steadily over the past few years, and is forecast to continue doing so. The difference between the two is in what they offer, while properties in Lisbon will be closer to the city center, homes in Cascais are larger and closer to the beach. 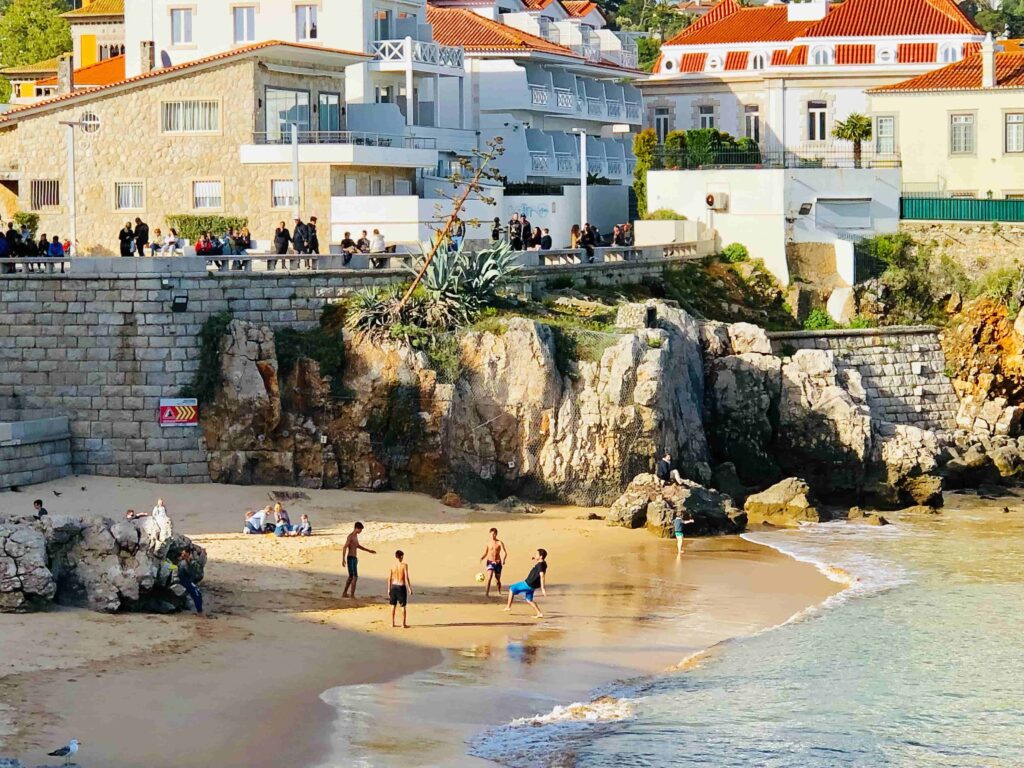 Frequently asked questions about where to buy property in Cascais

Is now a good time to invest in property in Cascais?

Real estate in Cascais is currently increasing in value at a steady rate, and therefore is an excellent investment opportunity.

Is it expensive to buy a house in Cascais?

Property in Cascais is valued higher than the rest of the country, but also presents a high return on investment.

Is it expensive to rent a house in Cascais?

Depending on the area, it can be expensive to rent a house in Cascais. There are a number of different neighborhoods to choose from, and renting in Estoril, for example, will be far more expensive than renting in Albediche.

Are there any international schools in Cascais?

There are many international schools in Cascais, in fact, there are more in Cascais than there are in Lisbon. Some of the most prestigious are St Julians, Cascais International School, St Peter’s and St Dominic’s. Take a look at this article to find out more.

The Linha de Cascais train line serves the whole of the coastal region between Lisbon and Cascais. Lisbon International Airport, which has frequent continental and international flights to major cities around the world, is less than 40km away.

Where do expats live in Cascais?

There are a number of expat communities in the Cascais region, due to the number of good international schools and high quality of life. Cascais, Estoril, Carcavelos, Parede and Alcabediche are all good choices for expats.

Is Cascais by the beach?

Yes, Cascais is by the beach, and also close to beautiful Sintra coastline as well.

What are the best beaches near Cascais?

Some of the most popular beaches near Cascais include Carcavelos, São Pedro, as well as the beaches in Sintra, such as Guincho.

Is Cascais near Lisbon?

Yes, the municipality of Cascais is just 30 km from Lisbon. It takes approximately 45 minutes to get to the center of Lisbon by car, or 30 minutes by express train.

What is the closest airport to Cascais?

Lisbon airport is the closest to Cascais, at just 35km, it takes about 35 minutes to get there via the A5 expressway.

What areas to avoid in Cascais?

There aren’t any areas that should be avoided, though the best place to buy property in Cascais depends entirely on your individual requirements.

Cascais is one of the most expensive areas in the whole of Portugal, however, there are still some less expensive investment options to be found.

What is the best area of Cascais to live in?

Which area of Cascais is best to live in depends entirely on your requirements. Each area has unique advantages, and to find the best place for you it could help to talk to a property specialist.

Get in touch to schedule a free 15-minute consultation about buying property in Portugal.

By continuing to use the site, you agree to the use of cookies. more information