Overseas interest in the Cyprus property market strengthened in March to become the sixth most sought after destination in the Top of the Props index published by TheMoveChannel.com.

The Cyprus property market moved up 12 places in the TheMoveChannel.com’s Top of the Props index in March 2017 to become the sixth most sought after location by overseas property investors.

Foreign buyers returned to the Cyprus property market at the end of 2016, with enquiries rising 22 per cent in the second half of the year. Enquiries faltered at the start of 2017, but buyers are now showing signs of returning in greater numbers.

In real terms, enquiries for Cypriot property rose by more than 50 per cent in Q1 2017 compared to Q4 2016. The country accounted for 3.03 per cent of enquiries, its highest share in two years.

“Foreign demand for Cypriot real estate is showing signs of strengthening again in 2017,” commented TheMoveChannel.com Director Dan Johnson. “Interest climbed in the final months of 2016, possibly fuelled by buyers racing to beat the deadline for a Capital Gains Tax incentive at the end of the year.

“Interest softened at the start of 2017, but enquiries have grown once more in March, without the impetus of the tax deadline. With prices bottoming out and climbing across almost all regions, according to multiple indices, conditions in the island’s market are certainly improving, which is beginning to bring back investors.

About Lead Galaxy and TheMoveChannel.com

Founded in 1999, TheMoveChannel.com is the leading independent website for international property, with more than 800,000 listings in over 100 countries around the world, marketed on behalf of agents, developers and private owners. 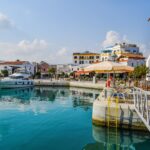